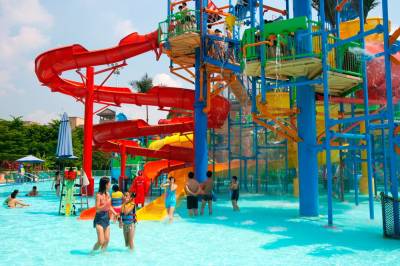 There is nothing quite like a ride down on a water slide on a hot summer day. Of course, there are some dangers associated with water parks, but lacerations and torn ligaments should not be among them. A Chicago woman suffered these exact injuries on a waterslide at Six Flags Great America in 2011. A Lake County jury awarded her $1.5 million last year, and just last month, an Illinois appellate court upheld that verdict.

According to court documents, the woman was riding the Wahoo Racer at the Hurricane Harbor water park—a section of Six Flags Great America—when she was injured. On that particular slide, riders descend face-first on a mat, beginning in a tube and ending in an open-air segment. The woman said that “she felt a blunt force in her hands and her right ankle” as she rode down. As the woman reached the bottom, the water was red with blood, park employees testified. She realized that her hands were bleeding, and she was taken to a nearby hospital where doctors performed surgery on her hand.

Despite receiving prompt medical attention, she was no longer able to move three of her fingers on that hand, forcing her to leave her job as an administrative assistant. She also said she continues to have trouble performing activities of daily living, such as brushing her teeth and cooking. Her lawsuit claimed that the park operated the slide in a careless and negligent manner and failed to properly inspect the slide.

At trial, the jury found that Great America, the parent company of Six Flags was liable for the woman’s injuries. The company appealed on the basis that the employees who were supervising the slide at the time were never given the chance to testify, nor were written reports by pertinent park workers presented. A three-judge appeals panel found that it was the company who failed to disclose who was working in that section of the park at the time of the incident, and the verdict was upheld.

As part of the woman’s lawsuit, she maintained that the park was guilty of negligence under the legal theory of res ipsa loquitur—a Latin phrase meaning “the thing speaks for itself.” This theory essentially asserts that the injuries would not have occurred unless someone acted negligently. For example, it might be understandable that the flowing water on a water slide could toss a rider in such a way that he or she hits his or her head without the injury necessarily being attributed to negligence. Lacerations and torn ligaments, however, should be completely preventable with proper maintenance, the suit claimed. The jury agreed with the claim and awarded the woman damages for her injuries.

Injured at an Amusement Park?

If you or a loved one has suffered an injury at an amusement park, county fair, or any other event that features rides and slides, contact an experienced Kane County personal injury attorney. Call 630-907-0909 for a free consultation at Kinnally Flaherty Krentz Loran Hodge & Masur, P.C. today.