Sports Injuries and the Assumption of Risk 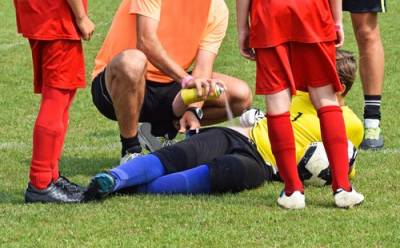 Sports and athleticism are encouraged within our lives and are essential parts of our education system. Our children learn a lot about life when competing in sports: how to work as part of a team, how to overcome adversity, how to accept both the wins and the losses. There is always, however, an inherent risk of injury when participating in sports. What happens if the injury is not inherent to the sport? Who is at fault?

The Assumption of Risk Doctrine

The assumption of risk doctrine in regard to participation in athletics dictates that by participating in a sport, one understands that there is a possibility of injury. A baseball player while at bat may not be surprised if he gets hit with a pitch because being hit with the ball is an acknowledged possibility and therefore the injury was foreseeable. The doctrine, as developed by case law in Illinois, determines the point where an athlete assumed the risk of injury inherent in the sport.

Difference Between Express and Implied Assumption of Risk

Express assumption of risk means that that the two parties agreed in advance that any injury sustained while participating in the sport is not subject to damages. Implied assumption of risk states that even if there were no express agreement between the parties, the party knew or had reason to know that the activity he/she was participating in had inherent risks and still decided to participate in the face of them.

Express and implied assumption of risk applies not only to athletes and participants but also to spectators who put themselves in harm’s way. For example, it will be difficult for a spectator in a baseball stadium who is hit by a foul ball to prove that the injury was not foreseeable and he/she did not assume the risk, whether express or implied, of being hit.

In Illinois, courts utilize the “comparative fault” standard, which evaluates how much fault the plaintiff had in causing his/her injury and how much fault the defendant had in causing the plaintiff’s injury. According to Illinois law, damages are only recoverable to the extent found by comparative fault. Therefore, if the defendant was 85 percent at fault, and the injured party was at fault for only 15 percent, then the defendant is only responsible for 85 percent of the damages. Recovery is barred completely if the plaintiff is more than 50 percent at fault.

How Assumption of Risk is Evaluated

With assumption of risk, the defendant’s duty of care (the amount of care he owes to any one person who is on his premises or using his facilities) is measured against the plaintiff’s ability to understand the risks of the activity and whether the plaintiff actually understood the risks inherent to the activity. For example, a spectator in a baseball stadium is aware that a foul ball could not only fly into the stands but but could also hit him. But, if a falling stadium light crashes and hits him, the falling stadium light was not a risk he was aware of, nor was it foreseeable, and most likely he would not be found to have assumed the risk of the injury.

The experience and knowledge of the athlete determine the level of understanding as to the risk inherent in participation. However, in school settings, the school has a duty to provide adequate supervision; the measure of the assumption of risk is whether the injury to the student-athlete was foreseeable and if a lack of appropriate supervision largely caused the injury.

If your child was injured while participating in an athletic activity or sport, contact an experienced Kane County personal injury attorney. Call Kinnally Flaherty Krentz Loran Hodge & Masur, P.C. at 630-907-0909 to discuss your options in a free, confidential consultation.