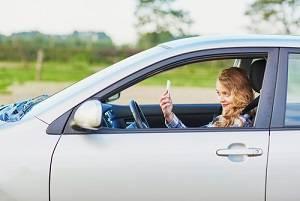 The temptation to send a quick text, answer a call, or type on a cell phone while driving affects many of us. Some drivers are even using social networking websites like Facebook and Instagram while behind the wheel. It is a habit that is proving again and again to be fatal. In the most recent, horrifying example, a young woman now faces charges of gross vehicular manslaughter and driving under the influence of alcohol after her distracted driving cost her sister her life.

A Tragic Set of Circumstances

The 18-year-old was driving a car in Los Banos with her younger sister and a friend when the driver decided to live-stream on Instagram. The girls filmed themselves talking and laughing before the crash occurred. In the video—which has since been removed from the social media site—the driver can be seen taking her eyes off the road constantly, driving with one hand, and even juggling a phone call and a drink while driving.

Soon after, she lost control of the vehicle, drove off the side of the road, crashed into a barbed-wire fence and flipped over. The driver’s sister and the friend were in the back seat and not wearing seatbelts. The two were ejected from the car, killing the sister and injuring the friend.

After the crash, the shaken driver picked up her phone and began explaining what happened, acknowledging that her sister may be dying. She then moves the cell phone to show her sister lying motionless on the ground and bleeding profusely. Sanchez tells her sister “I did not mean to kill you, sweetie. Sweetie, I am [expletive deleted] sorry. Sweetie, please, wake up!” Unfortunately, the girl did not wake up and was pronounced dead shortly afterward.

This disturbing video is not the first death to be shown to millions of people via live-streaming. Facebook, which owns Instagram, also struggled to contain a video of a man shooting and killing a pedestrian in Cleveland in April. Other videos worldwide have contained depictions of grisly murders, suicides, and other graphic incidents.

Distracted Driving and Alcohol is a Deadly Combination

The combination of distracted diving and driving under the influence of alcohol is extremely dangerous. At highway speeds, taking your eyes off the road for just five seconds means you have driven the length of a football field without looking. This is plenty of time to drive off of the road or hit another vehicle. Distracted driving accounts for approximately nine deaths and over 1,000 injuries in the United States every day.

If you or a loved one has been injured due to the carelessness of a distracted driver, our team is ready to help you get the compensation you deserve. Contact one of our experienced Kane County personal injury attorneys to discuss your case and to explore your available options. Call 630-907-0909 for a free consultation at Kinnally Flaherty Krentz Loran Hodge & Masur, P.C. today.