Who Is to Blame in a Driverless Car Crash? 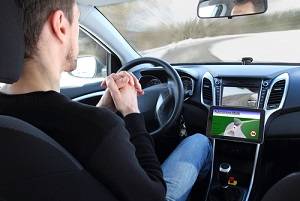 Driverless cars are thought to be the wave of the future, a way to decrease risks of distracted driving and improve safety. Unfortunately, the world is a long way off from actually realizing such a phenomenon. Case in point: the recent accident involving a bus and a Google autonomous vehicle (AV). This poses some potential setbacks for the company and driverless cars as a whole, but it also leaves many wondering who would be to blame in situations such as this.

While traveling about two miles per hour, the Google AV driver noticed a bus approaching in their left side mirror but mistakenly believed the bus would either stop or slow down to let them pass. The car’s software also apparently thought the bus would stop. Instead, as the Google AV re-entered the center lane, it made contact with the side of the bus, which was operating at about 15 miles per hour at the time of the accident. Sandbags in the road are also thought to be a contributing factor in the accident.

Current laws focus on driver negligence to determine fault and liability; generally, this is attributed in percentages, based upon various accident factors. The driver with the majority of blame is generally held responsible. Automated cars skew that sense of liability and responsibility, making it unclear as to who should be held at fault. Should it be the driver? The car itself? The software company?

No answers truly exist at the moment, but a recent breakthrough between the U.S National Highway Traffic Safety Administration (NHTSA) and Google suggests that the computers themselves may receive the same legal accountability as the drivers. For Google and other companies like them, this could pose as a bit of a setback in making autonomous cars the wave of the future.

Involved in an Accident? Get the Help You Need and Deserve

For now, cars like the Google AV are still in the testing phase, and will likely remain so until they can prove they are safe enough to operate without human interaction. As such, drivers are still held responsible and liable for their actions. If you or someone you love has been injured by another driver’s negligent actions, Kinnally Flaherty Krentz Loran Hodge & Masur P.C. can provide the help you need to pursue fair compensation. Schedule your free initial consultation with an experienced Aurora, Illinois automobile accident attorney. Call 630-907-0909 today.